As retirement planners, we often talk about the need for a retirement income that keeps pace with inflation. Without that, your spending power would erode over time, and you could find yourself a decade into retirement and struggling to make ends meet. That’s why Social Security, which provides supplemental income for retirees, issues Cost of Living Adjustments (COLAs) on a regular basis. Fortunately for federal retirees, their FERS annuity payments are also subject to COLA calculations.

While the official announcement of a COLA for both Social Security and FERS retirees isn’t released until October, we often can predict the likelihood of an increase in checks by analyzing past trends.

COLA for both types of retiree benefits is determined by the Consumer Price Index for Urban Wage Earners and Clerical Workers (CPI-W). If we take a look at last year’s CPI-W, compared to this year’s numbers, we can possibly estimate where we’re headed for 2020.

In January 2019, we saw a 2.8 percent increase in Social Security benefits, and a 2 percent bump for FERS annuities. That trend will likely continue, with another COLA released in January 2020.

While we can track CPI-W throughout the year, the COLA decision is based upon third quarter numbers. Right now we can say that May 2019’s CPI-W fell at 1.43 percent higher than the third-quarter CPI-W in 2018. So, we’re on track to see a COLA for 2020, although for now it is difficult to predict exactly how much.

And just in case you’re curious, no, federal employee pay raises are not connected to COLA. So while this information is useful to COLA-eligible retirees, it has no bearing on your pay if you’re still working.

Give us a call if you have other questions about your FERS annuity payments, and we’ll be happy to help.

This does not constitute an offer to buy or sell any security. Investments in securities are not suitable for all investors. Investment in any security may involve a high degree of risk and investors should review all “Risk Factors” before investing. Investors should perform their own due diligence before considering any investment. Past performance and/or forward looking statements are never an assurance of future results. Investment products, Insurance, and Annuity products are not FDIC Insured/Not Bank Guaranteed/Not Insured by any Federal Government Agency/May Lose Value. Always read the prospectus before investing.

Get your free guide to understanding your Federal retirement benefit options

Get the clarity you need with our free video guide on the Federal retirement benefit options available to you. Provide your name and email below and we'll send the video to your inbox. 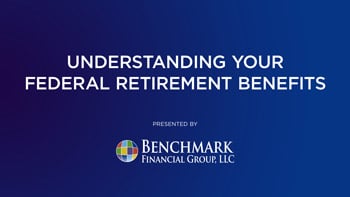 Success! Check your inbox for your video link.